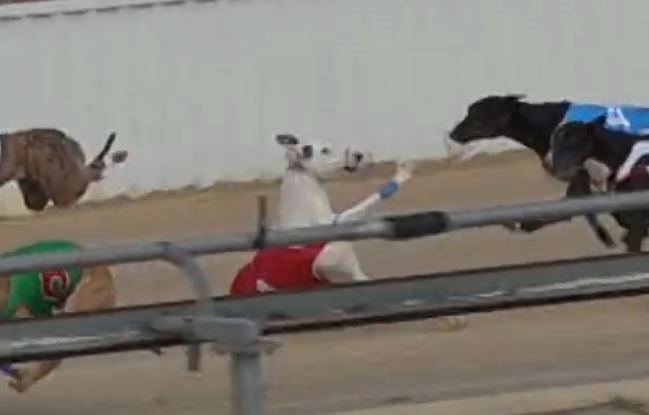 The Murray Bridge racetrack in South Australia has become one of the most lethal in Australia after the death of a young greyhound.

According to the Murray Bridge stewards’ report for 14 June 2021, in Race 12 two-year old Cash Or Cheque collided with other dogs on the first turn and fell. Sustaining a broken foreleg, she was euthanased by the on-track vet.

For the whole of 2020, only two greyhounds died at Murray Bridge.

The Murray Bridge facility has two racetracks – a one-turn “horseshoe” track, and a straight track. This year, three deaths have occurred at the curved track, with one in the catching pen after the race at the straight track.

The death of Cash Or Cheque takes the SA greyhound toll to nine killed in 2021. Nationally, 78 have died (listed here).

The Coalition for the Protection of Greyhounds (CPG) said the spate of deaths in SA highlighted the cruelty and dangers of greyhound racing.

The death of Cash Or Cheque has been covered by local radio and web media, including:  5MU Local News

Data note:  Of the 78 greyhounds killed so far on Australian racetracks in 2021 =

– 76% were fatally injured at track turns

– 60% were fatally injured by falling