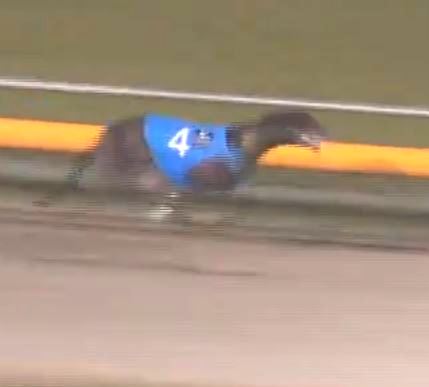 Only two years old, Action Plus collapsed and died after racing in Hobart in Tasmania on 26 August 2021 – International Dog Day.

In the stewards’ report, the on-track vet stated that Action Plus “collapsed and passed away” in the catching pen after Race 8.

He’s the sixth greyhound nationwide to collapse and die this year.

The deaths of the five other dogs were attributed to a ruptured aorta, ruptured abdominal blood vessel, thoracic haemorrhage, heart attack, and cardiac arrest. How is this happening?

The hypocrisy on International Dog Day is painful to see.

The Bendigo Advertiser, for example, published readers’ photos “celebrating our puppy pals”, neatly forgetting they are a race sponsor of a track that was the nation’s deadliest in 2020, with 14 greyhound deaths.

And so on and on.

Everyone says they love their dogs, and yet young Action Plus fell in a heap and died in an Australian catching pen on International Dog Day.

Image shows Action Plus approaching the finish line; he’ll be dead in a few seconds.