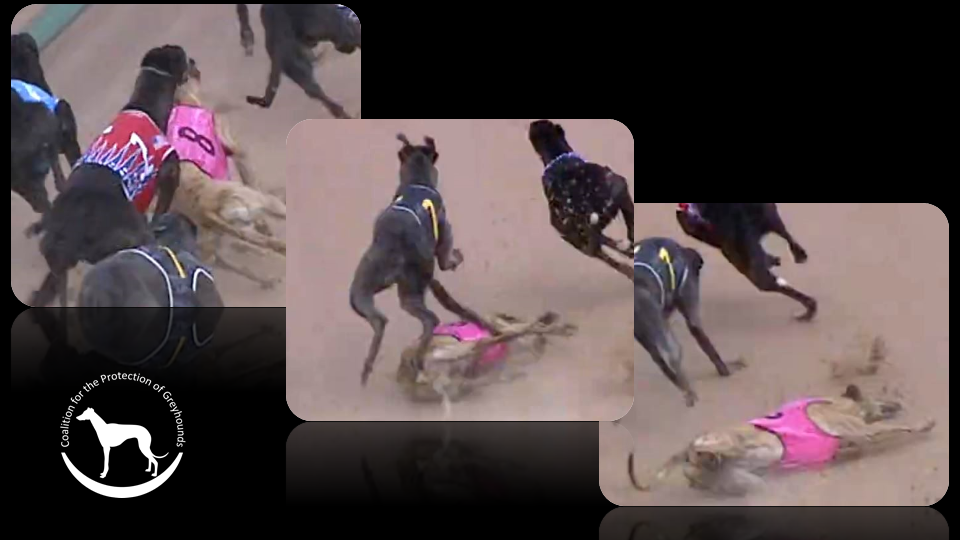 Montag Bale is the latest “smaller” female greyhound to be killed after another brutal incident on a racetrack.

Running in only her second race, Montag Bale collided with Mepunga Mantra, fell, and was trampled by Yield at the first turn at Melbourne’s The Meadows on 30/9/2021.

Montag Bale was euthanased with a broken foreleg.

The racing industry is aware of the risks faced by lighter greyhounds.

The new “J-curve” track at Traralgon VIC is an untried design where dogs will run for 300m straight and then turn in a tight circle for 200m.

Noted racing journalist Peter Davis says:  “Strong dogs will be required for what looks a testing circuit and smaller bitches, you’d think, will be vulnerable.”

Let’s remember a few other cases where female greyhounds suffered in a crowded race with more powerful dogs.

Paper Kite was killed on 24/9 at Newcastle. She was the lightest dog in her race, and collided with three other dogs, one more than six kilos heavier.

Bingo Balls was the lightest greyhound in her race at Newcastle on 25/9, falling and being killed.

Last year, two-year old white and red fawn Fire On Ice was concussed in a collision at the end of the Newcastle race.

She only weighed 23.9 kilos – almost 12 kilos lighter than the heaviest dog in the race. Six of the eight dogs weighed more than 30 kilos.