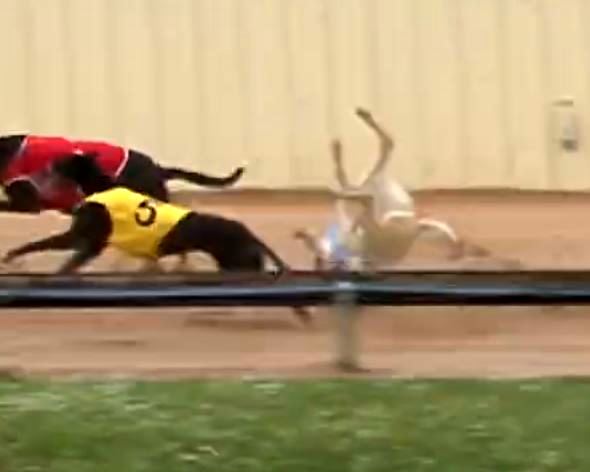 The recent horrific deaths of young greyhounds has highlighted the utter cruelty of the racing industry.

Maniac Martini was 23 months old when he collapsed and died after a race at Geelong VIC on 10 September 2021.

Alpaca Sunny was 19 months old when she was euthanased after breaking her neck at Mt Gambier SA on 12 September 2021.

Maniac Martini was running in his third race, Alpaca Sunny in her second.

The “racing career” of Maniac Martini lasted a total of 68 seconds, that of Alpaca Sunny only 25 seconds. Alpaca Sunny had won $125 in prizemoney.

These greyhounds won’t be mourned or remembered by the callous racing industry. They won little money and did nothing of note to get the punters excited. Easy come, easy go.

Of the seven greyhounds that have died so far by 14 September, five weren’t even two years old.

The deaths of Maniac Martini and Alpaca Sunny also remind us that racing dogs aren’t just killed after breaking their legs on the tracks.

Maniac Martini is the seventh greyhound to have collapsed and died while racing this year, nationwide.

These deaths were attributed to a ruptured aorta, ruptured abdominal blood vessel, thoracic haemorrhage, heart attack, and cardiac arrest. All but one dog were under three years old.

Alpaca Sunny is the eighth greyhound to die from neck or spinal fractures sustained in falls this year, nationwide.

Whether young or old, greyhounds are being ground out by an industry and politicians indifferent to their life.

Image shows Alpaca Sunny breaking her neck at Mt Gambier. Note the race video is no longer available on the GRSA website.