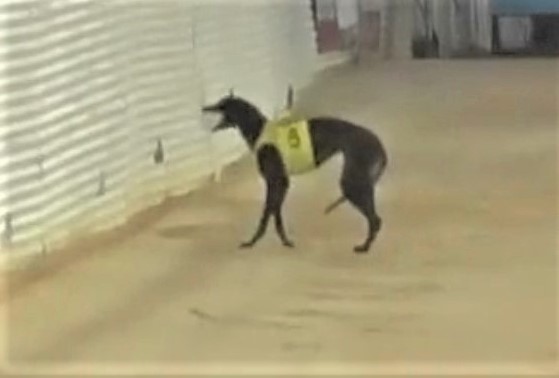 Ten young greyhounds lost their lives on Australian tracks in October. Five were killed over 5 days alone. All but one were under 3 years old. Four “failed to finish” their last deadly race. One poor greyhound, Bootleg Road, fell and fractured his wrist on the first turn but gamely ran on to the end. He was killed shortly after by the on-track vet.

NSW and Victorian tracks were responsible for the deaths of 4 greyhounds each. Queensland tracks killed a further two young dogs.

Nothing screams “getting social” like a night out at Wentworth Park, NSW according to the greyhound racing industry. Too bad that poor Don’t Stay fell at the first turn in the “Get Social with NSW GBOTA” race on October 5 and suffered a complete open compound fracture of her radius and ulna. Her broken bones would have protruded through the skin on her leg. Don’t Stay was 3 ½ .  She had raced 32 times for a total of $3,400 of prizemoney. With average winnings of $106 per race she was a liability and not worth saving. Don’t Stay was killed by the on- track vet.

Still in NSW, at The Gardens on October 7, Strictly Palaver could not go on following a collision and fall at the first turn. He had broken his foreleg. Strictly Palaver had raced 14 times and earned his connections over $11,000. He was killed by the on-track vet shortly after his last race.

October 8 saw two greyhounds killed racing. Lithgow NSW was the scene of young All Heart’s last race. Just over 2 years old, he fell at the first turn after colliding with another greyhound. He suffered an excruciating comminuted fracture of his distal femur. This type of injury in dogs is due usually to massive trauma such as being hit by a car. He had raced 14 times for paltry prizemoney of $250. All Heart was deemed not worth saving by his owner/trainer and killed by the on-track vet.

The second greyhound to die on October 8 was Destiny Rocks, a petite young girl not yet 2 ½ years old. She was racing in her 3rd and final race at Warragul in Victoria. She collided with another runner on the home turn, fell, and fractured her foreleg. Destiny Rocks started her career in April 2022 where she did not finish her first race. After a 6 months’ hiatus, she ran last in her 2nd race. She failed to finish her third and last race. Her total prize earnings was $0. Another liability, Destiny Rocks had to go. Killed by the on-track vet.

The very next day, October 9, Brightly Hayze, was killed following “an injury” to her foreleg while racing at the “safe” straight track at Capalaba, Qld. It was her 10th  and last race. The race video is distressing. She had won $4,000.

On October 11, Evil Mario, not yet two, fell at the first turn at Townsville Queensland and suffered a compound fracture of his foreleg. He could not go on. His eighth race was his last. Evil Mario was killed by the on-track vet.

Madam Whiskey was running in her 14th race at Gunnedah, NSW, when she fell at the home turn. She too suffered a compound fracture of her foreleg and was killed shortly after her race. Madam Whiskey had won her owner $7,600 during her short career lasting less than 3 months.

At Ballarat track, Victoria, on October 21 there was no need to euthanase Orson Seth. He ran last in his race then collapsed and died in the catching pen. Not yet 3, he had been raced just 4 days previously, winning his race. Orson Seth had won $16,000 from 43 starts.

The very next day at Traralgon, Victoria, Keoni Bale, a petite greyhound aged 21 months (still a puppy), collided with other runners, fell and fractured her left radius. She and three other greyhounds all failed to finish the race. Keoni Bale’s career had lasted less than three weeks. She was killed by the on-track vet.

On October 28, Bootleg Road was running in his 20th and final race at Shepparton track, Victoria. He fell at the first turn, and suffered a carpal or wrist fracture. The video of his final moments is pitiful to watch. After his fall, he regained his feet and ran on, trailing far behind the rest of the race. Bootleg Road’s fighting spirit was rewarded with a swift death at the hands of the on-track vet shortly after. He had been raced only 3 days previously. Bootleg Road had won just $3,825 from 20 starts.

Most number of starts  43

RIP. We will remember them.