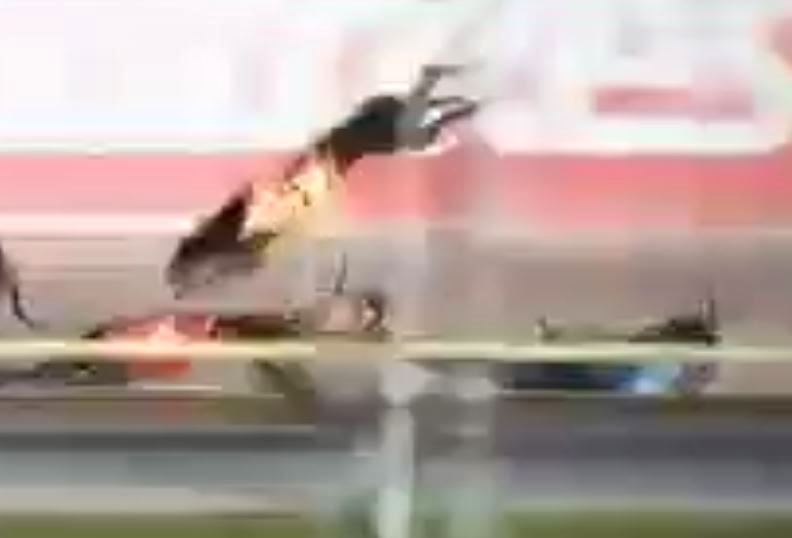 By removing or editing race videos that show the suffering of greyhounds, Greyhound Racing NSW admits that the realities of dog racing are unacceptable to the general public.

In Race 6 at Richmond NSW on 25 August, a multi-dog pile up occurred at the end of the back straight.

Another greyhound – Blue Diamonds – tried to avoid them by hurdling high into the air, but then crashed to earth and somersaulted multiple times into the fence.

The race video has been withheld from the GRNSW website, but we’ve seen a copy.

You can see why the industry’s image manipulators would want to hide the shocking footage. The public wouldn’t stand for this treatment of dogs.

The on-track vet declared that Blue Diamonds had “No apparent injury”. However, an ex-racing vet has advised us that:

“Many injuries after a fall aren’t apparent or easily detected immediately after a race, especially internal injuries.  It’s reported that greyhounds have a surge in fear/flight hormones and endorphins when racing. These hormones help to mask non-apparent injuries.

“Any dog having a serious fall should be re-vet checked a couple of days later before being cleared to race again. Imagine how many injuries aren’t being reported.”

GRNSW has made a practice of hiding the realities of greyhound racing, either by removing race videos or editing out race incidents. We’re tracking their race video censorships here

The other recent video withheld was the death of two-year old Mr. Recorder, who fell at a turn at Richmond on 24 August. The record of his “communited humeral fracture” has now been erased.

1 thought on “The horrific video they tried to hide”