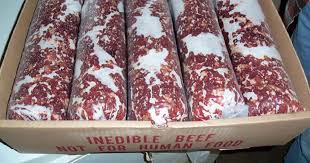 Many greyhounds across Australia are fed on a diet of knackery meat. This meat is unfit for human consumption and is sourced from dying, diseased, disabled and dead livestock.

In Australia, knackery meat is often derived from horses which are dead, dying or injured. Former racehorses are also regularly sent to knackeries for slaughter.

The Australian racing industry is well aware of the horrid conditions of knackeries. In 2017, Racing New South Wales pledged to stop sending former racehorses to slaughter. Even the Victoria greyhound industry openly acknowledges that knackery meat can produce positive swabs due to its contamination.

As a result of eating 4-D meat dogs can be exposed to pathogenic microorganisms, including Salmonella, Campylobacter jejuni, and Escherichia coli. In addition, the use of 4-D meat can lead to false drug positives due to drug residues that dogs ingest and pass into the urine. According to the U.S. Food and Drug Administration, raw 4-D meat “may present a potential health hazard to the animals that consume it and to the people who handle it.”

In 2017, one dog died and 72 fell ill at the Sanford Orlando Kennel Club in Florida from a suspected case of “bad meat.” Investigators found that the carpet of the greyhound who died was saturated in vomit and feces. In 2014, two dogs died and close to 100 fell ill at Daytona Beach Kennel Club, also due to “bad meat.”

The dog racing industry defends the use of 4-D meat by claiming that it is also used by commercial pet food companies. While it is true that 4-D meat may be found in commercial pet foods, the use of such meat at commercial dog tracks is distinctive because it is fed to dogs raw. Cooking meat destroys bacteria, but greyhound trainers are reluctant to do so for fear of negatively impacting racing performance.

Knackery meat and doping in Australia 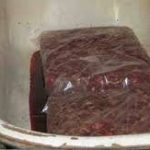 Greyhound Racing Victoria
June 2018
"In September last year the Commission placed the industry on notice that the use of contaminated meat from knackeries could be responsible for positive swabs for prohibited substances banned under the racing rules, particularly ketamine, xylazine and oxazepam. ... Apart from being banned substances under the rules of racing, the ingestion of these substances is harmful to the wellbeing of racing greyhounds. ... it is strongly recommended that participants who wish to avoid positive swabs for these substances and subsequent disciplinary action, source meat for their racing greyhounds from suppliers who do not supply knackery meat, therefore reducing the risk of contamination." 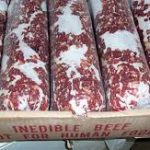 However, in spite of these acknowledgments, knackery meat remains a primary source of greyhound feed for the entire industry.

In October 2020, Susan Gittus, the head of the industry’s Adoption Program in Tasmania was suspended after pleading guilty to a doping charge. Stewards found Dehydronorketamine in a urine sample taken from one of Gittus’ dogs following a race. A stewards’ inquiry heard that the positive sample was a result of contaminated meat. Mrs Gittus was suspended for six months, four of which was suspended for 12 months, effective immediately.

Jan Davis, the CEO of RSPCA Tasmania said the case highlighted the need for an independent re-homing program at arms length from the industry.

“What we have at the moment is a greyhound adoption program that is run by greyhound owners and greyhound trainers with very little transparency as to how it’s run. That just doesn’t pass the pub test.

The revelations continue in 2020

Just days before the 2020 Melbourne Cup, a number of NSW studs were accused in parliament of sending racehorses to slaughter. This is despite rules introduced in 2017 to stop retired horses being sent to knackeries or abattoirs.

Animal Justice Party MP Andy Meddick told the Victorian Parliament that thoroughbreds from a number of studs had been sent to two pet food factories for slaughter: Kankool Pet Foods and Highland Petfood, both in NSW. This included “a number of racehorses” from the Broombee Stud, owned by billionaire Gerry Harvey.

Tasmanian MP Andrew Wilkie released a statement on 5 October reporting he had been approached by Tasmanians with links to the racing industry who stated that unwanted racehorses are regularly killed and made into dogfood.